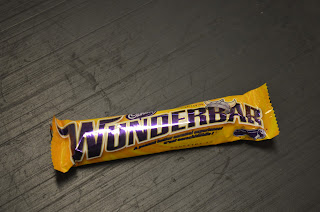 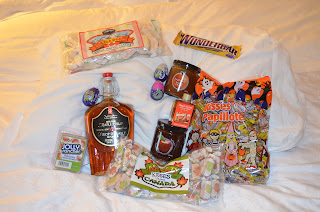 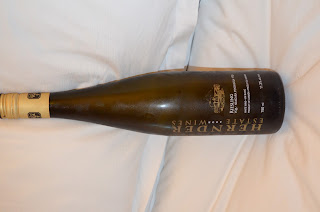 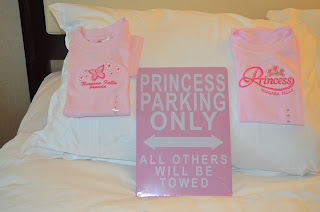 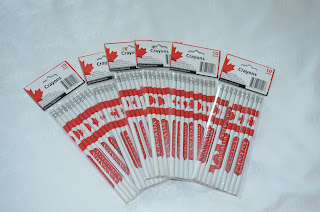 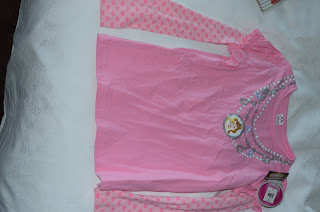 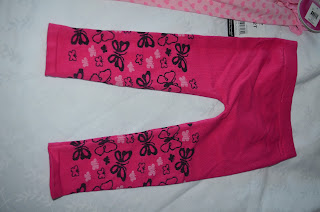 We went to several stores and picked up a few things for our loved ones and Brandie's students. We started giving them out as soon as we got back. We did pick up some additional items not pictures above but with our shopping we did realize that things were more expensive in Canada than the United States, but we did not realize how much more it would be until we started spending our cash.
Posted by Unknown at 8:13 PM No comments:

The last day was a travel day for us, but our flight wasn't scheduled to leave until 2:30pm, so we slept in a bit and then went to play miniature golf.  This is something Brandie has wanted me to take her to do for a long time, so it was great that we finally got to go do it.  The course was dinosaur themed, as the pictures above show.  Brandie wanted to play the expert course, so off we went.  I gave Brandie honors, and showed her the proper way to hold the putter and line it up.  She then proceeded with her first shot...and hit a hole in one!  I started calling her a ringer, that is until her second shot, which ricocheted off a rock and into the water.  I eventually got a hole in one of my own, and after the final tally (and many mulligans), Brandie won by one stroke!  While on the course, we found out our flight was delayed, and went to enjoy a movie, then made the drive back to Buffalo for our flight home.  It was a wonderful trip, but we were glad to get back home to our girls!

Posted by Unknown at 7:54 PM No comments:


Day 4 was the last day of the conference.  After the seminars, we went to the conference gala at the Hernder Estates Winery.  Before dinner, we were taken on a tour of the winery.  They make over 30 different types of wine, including ice wines.  Ice wines are made when they allow the grapes to freeze, which apparently enhances the sweetness, because the ice wine we samples was sweeter than any dessert wine we ever had!  We enjoyed wonderful wine and food, as well as good conversation with people from all over the country!

Posted by Unknown at 7:34 PM No comments:

Today was a lot of fun!  We started off by eating breakfast in St. Catherine's at a restaurant named The Bleu Turtle.  It was in half of an old industrial building and only had 9 tables in the entire place, but the food was excellent!  It was a gourmet chef that ran the place, and we had a wonderful breakfast.  Brandie had crabcakes and poached eggs, while I had lobster scrambled eggs with hollandaise sauce.

After breakfast I went to my seminars for the day.  Afterwards we went on the Maid of the Mist boat tour of Niagara Falls!  It was fun and a great way to experience the Falls up close.  The pictures above were taken while on the boat, and the video is when we approached the Horseshoe Falls.

Once we were finished, we went to the Clifton Hill tourist area to ride the Niagara Skywheel.  It is a huge ferris wheel that gives a great view of the area.  It was a busy day, but a lot of fun!
Posted by Unknown at 7:23 PM No comments:


Most of the morning seminars on this day didn't pertain much to me, so we decided to go for a drive.  We went to a town called Niagara on the Lake.  It was a lot like Fredricksburg, TX, lots of shops in older buildings.  Brandie snapped some pictures of the beautiful landscaping, which covered the entire area.  We ate ate the Shaw Cafe, which is named after George Bernard Shaw.  We then did a little shopping and headed back to the hotel.

The pictures of Niagara Falls above were taken from our hotel room.  We had floor to ceiling windows facing the falls, and a little glass door that opened to get an unencumbered view.  We were on the 14th floor, so we had little to block our view of the Falls, which was awesome!  After going to the seminars for the day, we headed to Casino Niagara, which was connected to the hotel.  Brandie is posing in front of their version of a Plinko board.  We were in a drawing to play, but we were not chosen.  Brandie went back to the hotel after that, and I stayed and played poker for a few hours and won some spending money.

Posted by Unknown at 6:48 PM No comments:


Day 1 of our trip to Niagara Falls for the Versaterm Conference was basically a travel day.  We left from Bush Intercontinental Airport around 7am, and after a layover at Dulles landed in Buffalo around 2:30pm.  After getting the rental car, we stopped for lunch at the Anchor Bar, which is the place Buffalo wings were invented!  We then made the 30 minute drive to Niagara Falls.  Brandie liked all of the churches she saw along the way, and took pictures as we drove.  We finally made it to the Rainbow Bridge, which is the border crossing between the USA and Canada.  The Canadian border agent wasn't very pleasant, I think she thought she was guarding the border at Matamoros or Nuevo Laredo instead of Niagara Falls.  We then made it to our hotel and got ready to see more the next day.
Posted by Unknown at 3:04 PM No comments: 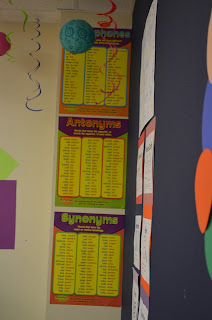 Posted by Unknown at 6:29 PM No comments: