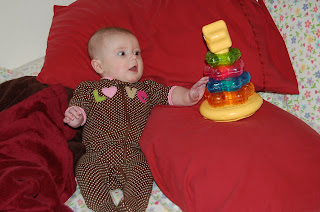 Abigail is growing so fast! The outfit she has on in this picture is a one-time wear because she is so long it would not allow for her to stretch her legs all the way out. Also in this picture she has discovered a new toy that she really loves! It was so wonderful to see her face light up in a big smile when this toy lit up and started to play music.

Abigail is still off the charts with her growth, but this is normal for her. She is longer than Emma was at this point. In this picture Abby is more than half the length Emma was at her first birthday which was 31 inches. Due to her length we even had to raise her exersaucer! She can move around in it and enjoys it for longer periods of time each week.

Abigail has been rolling over for about a month now. She has been holding her head up since the day she was born. She has been trying to get into the crawling position and when she can she gets frustrated, so she does the arm crawl a little instead. She can hold things, she grabs at things, she kicks all the time, she really loves movement. She tracks objects really well, when she hears our voice she looks for us, and when we call her name she responds.

Abigail is also making a tone of new sounds and we even hear her trying to say Dada. So it looks like she to will have her first word be Dada. She is very loud and will let you know when she is upset by trying to crack your ear drums, but overall she is a really happy baby.

Abigail is also like Emma at this age by fighting nap time! Abby really does not nap for long periods of time at all. She would rather be awake and taking in everything that is happening around her. No wonder we can't get many things done, she wants to be entertained and interacted with, Emma has really been stepping up in this role by playing with her sister.

These are just a few of the highlights and we will try to post a bit more often. Hope you enjoy the updates : )
Posted by Brandie Pheris at 11:17 AM