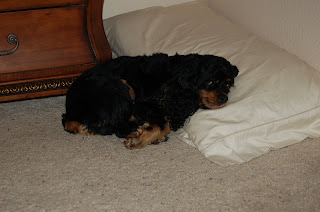 Since finding out about having Emma we have been doing a lot of baby stuff and not a ton of Reggie stuff. As you all know we went to Florida for Spring Break. When we got back and picked up Reggie from being kenneled, he had caught a cold while he was there. This is our little man not feeling well. Not only did he have to contend with the cold, he had so much more to deal with. 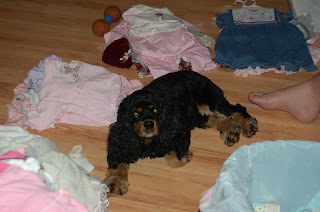 Every where Reggie went, Emma's clothing followed! This was the weekend we were doing the sorting and laundry. The poor pup walked around in a bit of a daze, sniffed the clothing, sneezed, then finally gave up and collapsed in the middle of the sorting in front of Ray. Once he had enough he climbed up in the chair with me for the night and watched some t. v. before returning to his pillow in our floor. 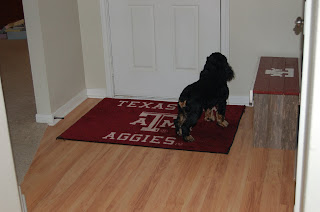 The one thing that did not change, even when he was fighting his cold, was him eagerly awaiting Ray at the door. Reggie has done this since he was a pup.
Posted by Brandie Pheris at 5:26 PM