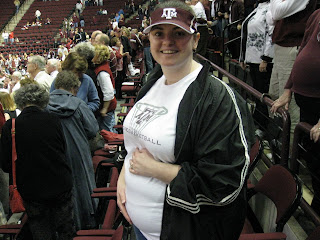 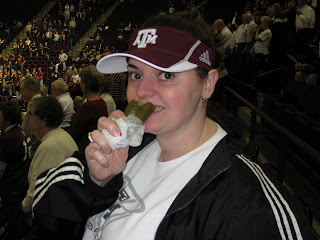 We have been exposing baby as much as possible to the Aggie way of life. Listing to the games by radio, watching them on t.v., and even going to the games in person. We have season tickets for Aggie Women's Hoops, so the baby has been in regular attendance at games listening to the fight song, doing the yells, and swaying to the War Hymn. Ray makes sure to talk to the baby and we are constantly using Aggie phrases like "good bull" , "gig' em", and "whoop." I even talk Aggie sports myself as often as possible. Being surrounded by the t-sip fans is a constant annoyance in this area, but one that gives me an opportunity to talk Ag Shop with the baby listening to every word.

Today the girls played t.u. in a big conference game. The Aggies started out slowly, playing sloppily and couldn't hit a basket. They were down by 7 at one point, but then kicked up the intensity. They retook the lead before halftime and never looked back, winning 76-65!
Posted by Unknown at 6:41 PM