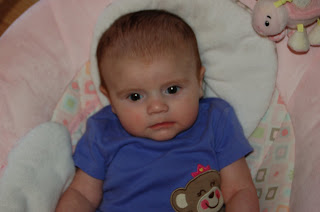 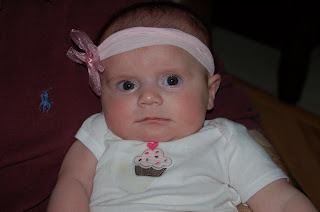 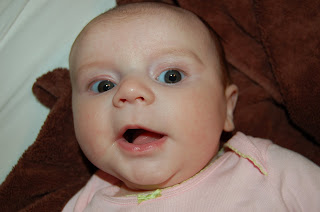 Starting on August 1st and not ending until August 16 Abigail was experiencing issues with an unstable temp. We would go most of the day and she would be great, then out of the blue her temp would spike and we wouldn't be able to get it down quick enough. Even with medication it would take 2 hours before the temp would start to decline.... so the round of ER visits and doctor visits began.

August 5th she went to the ER, she had multiple tests run, blood work, a chest x-ray, urinary test run by her having to be catheterized, and full body exam by the doctors. All tests came back fine and their diagnosis would be a virus or possible teething due to her already forming knots on her gums. As always with an ER visit you take your child to their doctor for a follow up, and we did and he said the same thing as the ER. So over the next week the fever would still come and go and we monitored her closely due to the history of febrile seizures with Emma and knowing that Abigail could possibly have the same thing.

August 11th we go back to the doctor due to Abigail having issues keeping down her bottle. Well, at this visit her doctor brushes it off as her acid reflux and says that she is fine, even with me telling him she is still running a fever off and on for 11 days at this point. Needless to say at this point I was looking at changing doctors...

August 12 Abigail's fever hit 102.8 and we were once again directed to the ER by the on-call doctor and nurse. Abigail had to have 5 pokes with a needle to draw blood for multiple tests, she had another chest x-ray, and other tests, and full body exam and again the ER said it was possible that she had another virus... so this would be two back to back viruses.

We change doctors and Abigail goes and sees her on August 14th, August 15th, and during this time the doctor is concerned that she has run the fever so long that she orders blood work both days to double check the findings of the ER and on the 15th suggest we go to and ENT due to wax build up in her right ear. So on the 15th the ENT cleans out her ears, runs a test and we find out this entire time she had fluid built up behind the right ear drum that was causing the spike in her temp and she starts her antibiotics. At this point we feel relieved and blessed that we found out what the cause was.

August 16th Abigail can't keep her bottle down or the antibiotic and we are instructed to take her back into the doctor. At this point our doctor is recommending that she be hospitalized due to her inability to keep down her feedings and medication, along with her fever issues. Ray asks if there is anything to be done before then and they suggest a fast acting antibiotic injection... but warn us that if she does not do better overnight that she would be hospitalized. So we opt for the injection and that changed everything... our girl is now been fever free since the 16th and is eating like a champ. She is currently having some other tests run to double check some things but all is looking good.

So for all of you who have been wondering why Ray had to miss work, why we couldn't attend celebrations, or why I was stressed all you have to do is read the book above to see why.