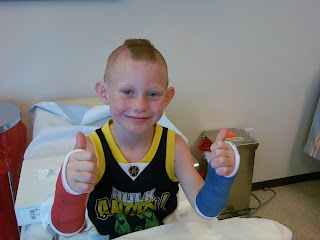 Well, for those of you who know my brother, you know that he grew up liking extreme sports. Shannon was into X-Games stuff like biking, skateboarding, gymnastics, boating, and the list can go on and on. Shannon grew up with no sense of fear and would always try anything once and if he liked it and it gave him a rush he would do it multiple times.

As you can see in the picture above Kaleb has a cast on both arms. Kaleb like his father has no sense of fear. With this past week's activities he got to stay at his Memaw's house, and when his parents came to pick him up he went to the backyard and played as the adults were talking and decided to create his own extreme sport of "leap frog off of fences." Needless to say, the outcome was not to the adults liking nor were they aware he decided to do something so scary. When he fell, I'm told he took like a little man, didn't make a big deal or fuss just walked over to the adults to let them know he was hurt.

They rushed him to the doctor and he had some x-rays taken and the doctor's informed them that he has hairline fractures in the large bones in both of his arms. Now he will be wearing his casts for the next 6 to 8 weeks, with a few more doctors appointments in between. I'm hoping this will help to curtail his sense of adventure, but I doubt it will.
Posted by Brandie Pheris at 11:28 AM